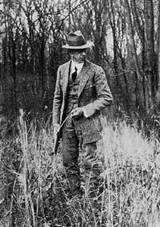 General Description of the Teal Maps Collection and of its Author

There are over a thousand maps in this collection. Frank J. Teal, who prepared most of the maps, was a surveyor who did most of his professional work in Rhinebeck and Red Hook. He was a native of Rhinebeck, from a family that had local roots dating to the Palatine settlement in the early 18th century. What many older local citizens remember is that Frank Teal was murdered in 1949--a murder that shocked and bewildered the community and that to this day remains in the NY State Police files among their unsolved cases. Teal had lived most of his 82 years in a house bordering what was later to become the Rhinebeck Aerodrome, and in that house he had done most of the office portion of his professional work as a land surveyor and engineer. A few days before he died, he had just started another job. Someone had entered his house, shot him twice in the head, and started a fire to try to cover up the crime. The fire was only partially successful, and most of his work papers have survived. (A major portion of those papers are in the archives of the Egbert Benson Historical Society of Red Hook--appropriately so, since much of his work involved properties in Red Hook.) We should also point out that most of the more recent maps in the collection are the product of Teal’s partner and successor, Robert Decker, who ably continued as the major surveyor in this area until he passed away in 1966.

And many of those papers are in the archives of the Rhinebeck Historical Society at the Starr Library--passed along to us through the good graces of Winthrop Aldrich and others in Red Hook. Because Teal had stored many of his maps in a chicken coop, exposed to the weather and to the chickens, they are not in good condition. Much of what we have in Rhinebeck are not his final products--those became the property of his clients. What we have instead are the work papers that he used to draft the final products. While many are in pencil on thin paper and not as visually stunning as his final maps, they are in many ways even more valuable because they show the process he (and his clients) went through to create a final product. His list of clients is an index of the estate owners of northern Dutchess County--Astor, Delano, Dows, Morton, Suckley, to name a few. If you needed something done right in the first half of the 20th century, you hired Frank J. Teal. And although money was probably no object for these clients, Teal was notorious for his low prices. In an article she wrote about Teal for the Egbert Benson Historical Society, Clare O'Neill Carr relates that after he had sent a bill to the contractors for whom he had surveyed the Bard campus for its WPA-era barracks housing, they returned the bill to him, saying it was too low to be acceptable to the authorities in Washington.

Description of the fields in the database:

Scan ID#: Over 200 of these maps have been scanned by Alan Slingerland of New Archives, courtesy of the Consortium of Rhinebeck History. The scans are on file at The Rhinebeck Historical Society.

ID: The numbers are in order of when the map was initially described by RHS.

Bundle No: We found the maps in 60 bundles. Maps that otherwise appear to be undecipherable sometimes can be explained by examining others in the same bundle.

Date: We usually did not assign a date unless it actually appeared on the map. Sometimes the only date is the year of the compass reading that was used as a reference, in which case we labelled date as “1917 North,” although the map itself may well have been done later. In the case of two or three dates appearing on the same map, we usually used the earlier date.

Title of Map: Our first choice would be a printed title, usually in the lower part of the map; second choice would be a handwritten title, preferably inside the map, but often on an outside edge; absent any title, we created what we hope is an accurate and brief description.

Media Link: Link to the actual map image (if available)

Map Type: Most of the maps are “surveys”; many show contours and these are “topo surveys”; since Teal did a lot of sidewalk and drainage planning for the Village of Rhinebeck,  there are numerous “profiles.” Other categories include “site plan,” “elevations,” “calculation sheets,” and “sketch plans.”

Scale: The scale is usually indicated on the more finished maps. Since many of these were work papers never intended for use by anyone else, the scale is not written on the map and we had to calculate it by using a ruler with an available distance measurement noted on the map.

Material: Only a very few of the maps are on linen, since that was expensive and intended for his clients. Most are on paper, of varying weight.

Medium: The most recent maps, especially those by Robert Decker, are often printed. The majority of the older maps are in pencil—if colored pencil, that is indicated. Occasionally, Teal will use ink, and that is indicated.

Condition: The most recent maps tend to be in good condition. The older maps have not fared so well. The heavier the paper, the more likely the map has suffered from fluctuations in storage conditions, some with very long rips, occasionally with sections missing.

Location: Unless a map is clearly identifiable as a description of a specific village or town (usually Rhinebeck), we have indicated “Unknown.”

Identifiers: Whatever common or proper nouns appear on the map have been recorded in this field. If the identifier field is blank, it may only mean that our volunteers have not yet had an opportunity to review this particular map. Properly completing this field has been the most time-consuming part of our work on the Teal maps.

Surnames: Family names appearing on the map—actually a subset of the Identifiers field.

Signer: Usually Frank Teal or Robert Decker. If the handwriting was clearly Teal’s, the map is attributed to him, although in many cases we only suspect authorship and in those cases we have indicated “Unknown.”

Notes: For topo maps, here we indicate the amount between contours; where acreage is specified on a map, it is indicted in the notes; if this map should be compared with another, that other map is indicated here.

Width: measured in inches, to the quarter inch.

Vertical: Click on this field to view the data in vertical format. (If you wanted to print the description of a map, this would be the way to do it.)

The database would not have been possible without the help of many, including:
Karen Wojtaszek
Alan Slingerland
Nancy Kelly
The Thompson Trust
Bobbie Thomson and Barbara Bielenberg of the Egbert Benson Historical Society of Red Hook
Rebecca Johnson
Elaine  Cruickshank
Kay Verrilli
The Consortium of Rhinebeck History