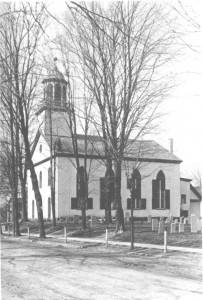 The Rhinebeck Reformed Church was founded in 1731 by the Dutch who settled Dutchess County, New York.

Here, wealthy founders of the town of Rhinebeck, farmers, merchants, slaves and families worshiped together
in the original building, which was constructed in 1731.  In later years, soldiers of the Revolutionary War
worshiped here, across the street from the former training grounds of the army of George Washington.

In the early 1800's the original building needed to be replaced and the present structure was erected by 1808.
One will note that the south and west facades are brick and the north and east are constructed from stone.
When the structure of the church was being planned there were members who could not afford to donate funds
to buy brick, so it was decided that those who were able would buy bricks, and those who did not have
the means would bring stones gathered from their fields and farms.

Together these people used brick, stone and mortar to construct their house of worship.   In using both the
stone and the brick, all the members of the church were represented; an illustration of the diversity of the
community during that period of time as well. 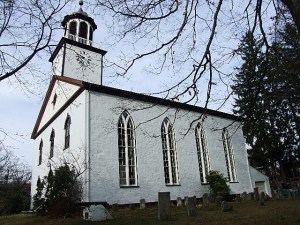 Today, Rhinebeck still has a diverse population of “bricks and stones.”   As in the 18th, 19th and 20th centuries,
Rhinebeck Reformed Church’s membership still comes from a variety of backgrounds, melding together like
the stone, brick and mortar of the church structure.